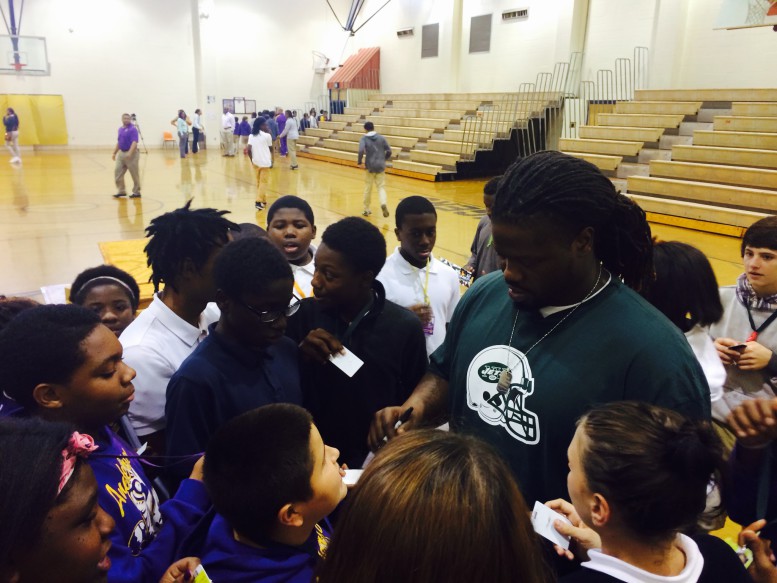 It’s hard to argue with or doubt a hulk of a young man who stands 6 feet, 4 inches tall and weighs 350 pounds, so, hopefully, hundreds of local students took Damon Harrison’s message to heart Tuesday.

Harrison was on a mission in his hometown when he spoke to students at Anderson Middle School and Westgate High School, both of which he attended before moving to Lake Charles and becoming an All-District and All-Southwest Louisiana football player at Lake Charles Boston Academy.

In a feature story Wednesday in The Daily Iberian, Harrison emphasized the importance of being in the classroom and the need to study for a chance to be successful in life.

“A lot of kids at a young age don’t really know how important the time they’re spending in school is and how it affects the rest of their lives, so I’m just coming back and letting them know I’ve been down the same road they’re going down and I made my mistakes in the classroom. I don’t have many regrets in life, but not taking school seriously is one of them,” said the 26-year-old nose tackle for the New York Jets by way of Northwest Mississippi Community College and William Penn University in Oskaloosa, Idaho.

Harrison signed with the Jets as an undrafted free agent in 2012. His success story continues.

It hasn’t always been that way, however.

At AMS, Harrison was cut from the football team. He wasn’t able to play at Westgate either, and after an attempt to be a water boy he quit because of the teasing.

As Harrison grew up, he realized there no one who he could relate to in the sports world. That, he said, is why he’s taking advantage of his status as an NFL player to talk to youngsters about the opportunities that are there if the students look for them.

“It may not touch everybody, but it will somebody. Just coming back and being vocal and being here physically talking with them, letting them see me and ask me questions and let me ask themquestions,” he said, noting one of his recurring themes is self-motivation.

His return to New Iberia was welcomed by veteran AMS head coach Glenn Fondal, who has turned out many winning football teams. That Harrison admitted to playing around and not taking his grades seriously should strike a nerve with at least some students.

“No doubt. We have a lot of those kids like that. They don’t find anything they want to do until they get into athletics,” Fondal said, adding the students enjoyed the talk.

Thanks, Damon, for remembering where you came from and thinking about the young people in this community who can benefit from your experiences and guidance.