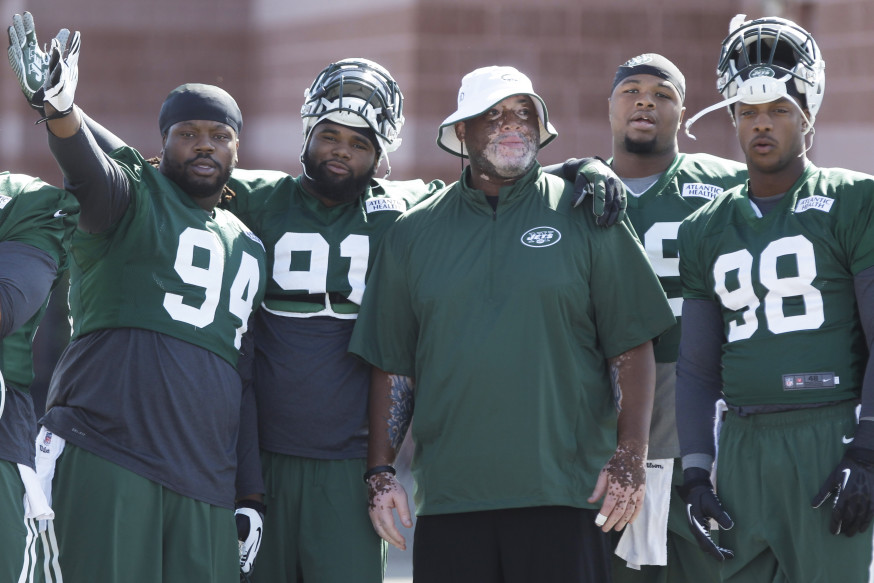 The Jets’ outside linebacker understood why the question had to be asked. But with one short reply, he put to bed any talk of his potentially tenuous future with the franchise.

“The sky’s the limit,” Coples said of the defense’s potential Tuesday night, while at the United Way of New York City’s 22nd annual Gridiron Gala in Manhattan. “We’ve got all the personnel, we’ve got the coaches. At the end of the day, we’ve just got to make sure that we go out there and put it on the field.”

Coples — who was one of the night’s honorees, along with Giants coach Tom Coughlin and Giants cornerback Prince Amukamara — said he wasn’t surprised the Jets chose to use their sixth overall pick on a defensive lineman.

“I think I kind of understand the business side of it a little bit,” he said. “Although we are stacked, with a new staff and a new GM and a new coach, in their first draft they’re going to take the overall best player at that time. And he was it.

“So we welcome him with wide-open arms and we’re going to take care of him and make sure he’s as productive as he can be. There’s no rivalry or anything like that. It’s only going to make us better and stronger.”

The Jets recently picked up Coples’ option for 2016. But because it’s guaranteed only for injury, the team still can cut him in March (the start of the new league year) without any financial ramifications (unless he gets hurt and misses the entire 2016 season).

Still, Coples said he’s not at all worried about his starting job within the front seven — not even with talented rookies like Williams and Mauldin in the mix.

“Nah,” Coples said with a laugh. “I don’t see myself losing playing time.”

In partnership with the Jets and Giants, the Gridiron Gala had raised more than $25 million in support of initiatives for high school students and vulnerable youth.

Jets defensive end Muhammad Wilkerson and former Jets cornerback Kyle Wilson have been honored in the past as the event’s “Hometown Heroes,” as well as Giants Victor Cruz and Eli Manning.

“It feels good,” Coples said of his award. “I think it’s my duty to serve in the community and give back. . . . I come from an urban area so I can relate to all phases of life, so it’s cool for me to go back and get with kids and just talk to people and hear different stories and different struggles that’s going on in life and showing that I can help them.”