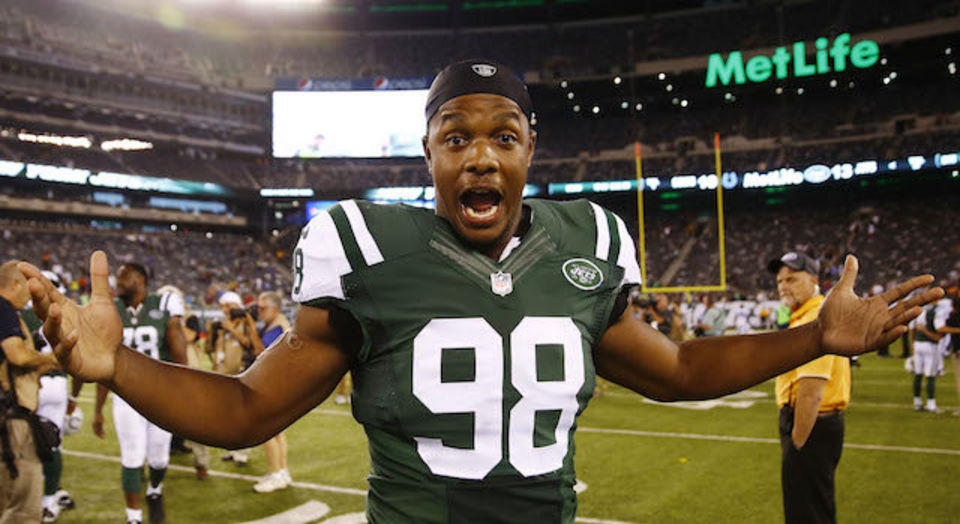 It’s been exactly a month since the Jets began their first offseason workouts under new head coach Todd Bowles.

They haven’t been able to do a whole lot of on-field work. Late last month, they held a three-day minicamp, during which they installed some of their new offensive and defensive schemes. The Jets’ veterans won’t be back on the field until May 19, when organized team activities begin.

But so far, during his brief exposure to Bowles’ 3-4 defense, rush outside linebacker Quinton Coples believes his role will change for the better in 2015.

“Well, I won’t be jamming receivers,” Coples said, comparing Bowles’ defense to former coach Rex Ryan’s system. “I won’t be guarding the No. 1 receiver. That’s a big change. Other than that, a lot more rushing. I’ll be going against the quarterback a lot. I will be dropping [into pass coverage] a little bit, as well, but a lot more going forward [with rushing the quarterback]. They don’t need me in coverage anymore, as you guys can tell.”

Coples was joking with the first part of this quote. Ryan also ran a 3-4 defense, and it isn’t all that different from Bowles’ scheme, Coples said. But because of the Jets’ shortcomings in the secondary last season, Ryan had to align Coples out wide sometimes, to jam receivers. This obviously wasn’t the role Ryan ideally wanted Coples to play.

Jets general manager Mike Maccagnan upgraded the Jets’ secondary this offseason — most notably by signing cornerbacks Darrelle Revis and Antonio Cromartie — so Coples won’t have to do that gimmicky stuff anymore, with jamming receivers.

“It’s a blessing,” Coples said of the Jets’ additions in the defensive backfield. “It’s just going to give me more opportunities, give the front more opportunities. We’re excited as a front and looking forward to getting after the quarterback.”

There should be plenty of chances for the Jets’ front to make coverage sacks, as quarterbacks struggle to find open receivers down the field.

“Not too many quarterbacks will be successful with that back end [of the Jets’ defense], the way they are,” Coples said.

Beyond ditching his gimmicky role, Coples also believes his regular duties this season will involve more pass rushing, and less dropping into coverage from his linebacker position on the edge of the Jets’ defensive front.

Coples was a defensive lineman in college. The Jets drafted him 16th overall in 2012. Ryan moved Coples to rush outside linebacker in 2013. It was a rocky adjustment at times, as Coples got used to the non-pass rushing aspects of the job, like dropping into coverage.

Coples needs to take a step forward in 2015. Yes, the Jets picked up the fifth-year option in his rookie contract, though that doesn’t mean they definitely will retain him in 2016. Far from it. He must prove to the Jets that he is worth keeping.

The Jets just drafted an outside linebacker, Louisville’s Lorenzo Mauldin, in the third round. But the presence of Coples and Jason Babin (who turns 35 later this month) at the rush linebacker spot means Mauldin won’t be forced to contribute immediately.

Will more pass rushing and fewer coverage duties lead to progress for Coples in 2015? Coples hopes so, though he isn’t dwelling on what he had to do last year.

But rushing the quarterback …

Coples jumped in to finish the sentence.