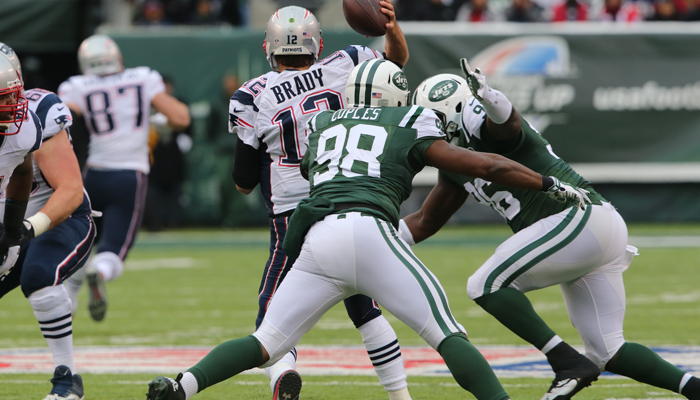 Versatility is a big weapon in Quinton Coples‘ arsenal. And actually, I think that’s hurt him in some fans’ eyes because he’s never been turned loose for a prolonged period as a pass rusher.

But that’s OK with Q. Just tell him what you want him to do.

“I’m ‘zero to free safety,’ ” he said of his position, zero being zero-technique, head-up on the center. “Free safety is the only thing I haven’t played, but I’m prepared for it. I’ve been a corner, I’ve been an outside linebacker, inside linebacker, all up and down the line.

“I love it. It’s good for me,” he said before the end of last week’s full-squad minicamp “I’ll be judged on just pass-rushing, but I enjoy dropping, I enjoy playing linebacker, I enjoy pass-rushing. I just take advantage of the opportunities.”

Coples is much the same way when he goes back home to Kinston, NC. We’ve told you stories the previous three years about how he has thrown a big bash for the town, and he’s already begun to set the table again.

“Yeah, it’s July 10-12, and each year it’s getting better and better,” Coples said. “It’s a weekend, so Friday is more of a fund-raiser, business, social, meet-and-greet type of deal. Saturday you’ve got the football camp, a 7-on-7 game, a basketball tournament. At night we’ve got an old school vs. new school game and then the basketball championship. Then Sunday we have a big cookout all day and we feed the whole city.”

And we suspect he’ll be pressing the flesh Friday, officiating Saturday and serving up barbe-Que on Sunday.

“Right, it’s all me, I do all those things,” he said with his infectious smile. “I use my resources in the city, I’m on the ground doing all the work.” He adds that the cookout is intended for Kinston but “I tell everybody to come out. There’s more than enough food.”

It’s all part of the Quinton Coples Foundation, which he runs with his manager, Kurtis Stewart of New Bern, NC. And not only does he hold his town-wide summer event but he also orders a truckload of turkeys for distribution before Thanksgiving, and he’s extended his Student of the Month initiative from Shabazz HS in Newark, NJ, to the four schools in Kinston this year. You can check out the foundation’s work on his website.

“The foundation is there basically for people growing up in unfortunate situations — loss of a parent, foster care, homelessness, things of that nature,” he said. “It’s all about helping to make a difference.”

It’s hard not to root for a guy with a heart this big. Fans want to see more on the field, but Coples also flashed his talent in his multiple roles since arriving in 2012. One rough measure of his effectiveness is in all defensive plays for no gain or loss (sacks, rushes, receptions). Q has been in on 44.5 tackles in those situations for 174 yards of losses.

Three of the opponents’ four longest losses on runs and passes the past two years have been the result of Coples solo tackles (Josh Hill vs. New Orleans in ’13, Maurice Jones-Drew vs. Oakland and LeGarrette Blount vs. Pittsburgh last year).

By comparison, the only player with better totals since ’12 is Muhammad Wilkerson with 58 tackles for 184 yards in losses. But Mo has played about 2,600 defensive snaps in that span, 600 more than Coples. Sheldon Richardson, of course, didn’t arrive until 2013, so his totals (36 tackles, 99 yards in losses) are also in this conversation.

In any event, Coples is right that fans want to see sacks, and it’s possible he’ll get more of those opportunities in Todd Bowles’ and Kacy Rodgers’ new defense this season.

“I still have situations where I’m dropping and stuff. It’s not all pass-rushing,” he said. “But I definitely have more of a pass-rushing role than I’ve had before.”

As for the rest of his unit, Coples liked what he saw from the offseason program through the minicamp.

“I think the camp was productive. I think a lot of guys have caught onto the system pretty well,” he said. “Talking to the coaches, we’ve put in about 80 percent of the plays, so guys have got a good grasp on that. The sky’s the limit, man. I think as long as everybody goes home, stays focused, stays in shape — I’m not expecting ’em not to — I think everything else will take care of itself.”