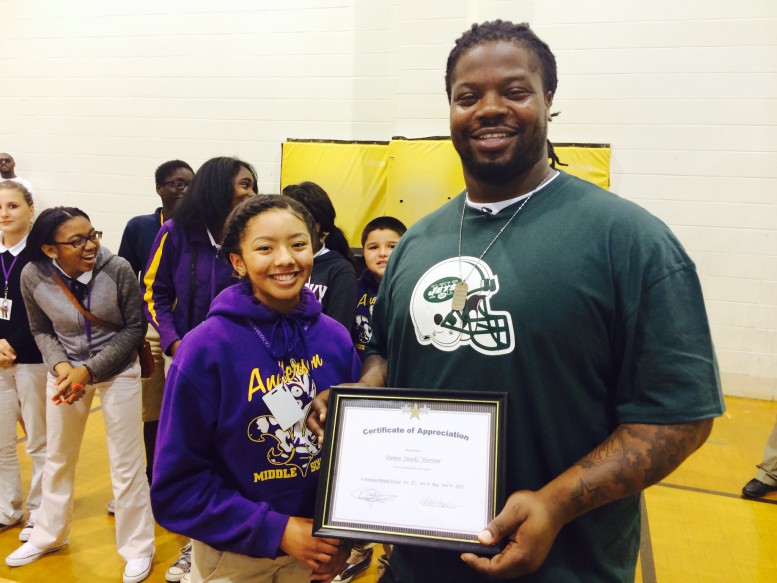 It wasn’t until he started taking both school and sports seriously that Damon Harrison took the first steps toward what has become an NFL career.

The New York Jets starting nose tackle was back in his hometown Tuesday to speak with students at Anderson Middle School and Westgate High School about the importance of taking their education seriously. Harrison, now 6 feet 4 inches tall and 350 pounds, failed to make the team at AMS and Westgate before moving to Lake Charles as a sophomore in high school.

“A lot of kids at a young age don’t really know how important the time they’re spending in school is and how it affects the rest of their lives, so I’m just coming back and letting them know I’ve been down the same road they’re going down and I made my mistakes in the classroom,” the 26-year-old father of two said. “I don’t have many regrets in life, but not taking school seriously is one of them.”

It wasn’t until his junior year that he began to realize he had to work harder at school and on the basketball court, his original sport of choice. An injury to his knee that led to a weight gain brought him to football, where he played on both lines as a senior and earned All-District and All-Southwest Louisiana honors at Lake Charles Boston Academy. That led him to Northwest Mississippi Community College and eventually to William Penn University in Oskaloosa, Idaho, and later signed with the Jets as an undrafted free agent in 2012.

Harrison said he uses his own story as encouragement for young athletes.

“As far as sports goes, I was cut from Anderson Middle School here, got to Westgate and wasn’t able to play there either,” he said. “I’m just letting them know, if you’re very passionate about it, you may take some time to develop into the player that you want to be or that you need to be, but as long as you don’t give up and keep working towards it, you’ll accomplish it 10 out of 10 (times).”

AMS coach Glenn Fondal said Harrison wasn’t really serious about football when he went out for the squad in junior high school. Harrison decided to be the team’s water boy and manager, but got teased about it, so he decided not to come back, Fondal said. The coach said Harrison later contacted him and let him know it had made an impact on him. Fondal has kept an eye on Harrison’s career over the years.

“He beat the odds,” Fondal said. “He went to a junior college in Mississippi, then gave William Penn a call (talking to former NMCC assistant coach Steve Miller), and the rest is history.”

Harrison said that growing up in New Iberia, he wasn’t aware of anyone he could relate to who made it in the sports world. He’s glad he’s in a position now to talk to some of the younger kids about the opportunities they have. He plans to work on other things in the community, and to return for talks with kids at the local schools.

“It may not touch everybody, but it will somebody,” he said. “Just coming back and being vocal and being here physically and talking with them, letting them see me and ask them questions and let them ask me questions.”

Harrison said some of his relatives are at WHS, and it was an easygoing crowd when he spoke to them Tuesday morning.

“It was exciting,” he said.

Harrison and his sister visited with Fondal last year, he said, before arranging the speech this year.

“He was one of the ones that lit that fire under me,” Harrison said. “I just did not want to take no for an answer.”

He said self-motivation is one of the points he stresses with youngsters he speaks with.

“I tell them, if you don’t do it yourself, nobody’s going to do it for you,” Harrison said. “If you’re not self-motivated, if you’re looking for someone else to motivate you, they’re going to take their time and do it when it’s convenient for them.”

Fondal said Harrison told the kids at AMS how he played around and didn’t take his grades seriously. That can strike a chord with youngsters, he said.

“No doubt,” Fondal said. “We have a lot of those kids like that. They don’t find anything they want to do until they get into athletics. The kids really enjoyed (the talk). I was glad he came back.”