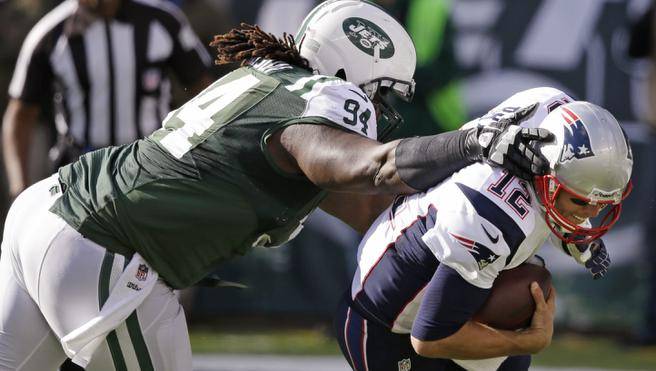 Damon Harrison is the forgotten man.

He isn’t a household name like Jets defensive linemen Muhammad Wilkerson or Sheldon Richardson. Nor is he the top-rated defensive prospect of the 2015 draft class, like No. 6 overall pick Leonard Williams.

That’s why the chip on Harrison’s shoulder will remain firmly planted in place. No matter how much Twitter love he receives from fans or positive grades he’s given by ProFootballFocus, Harrison will never allow himself to think he’s arrived.

“I don’t think I ever will be able to feel that way,” the Jets nose tackle told Newsday recently. “I’m in a room with three first-rounders — and four if you count [converted outside linebacker] Quinton [Coples] — and some other well-established guys in the NFL as well. I’ll always feel that way.

“I talk to a lot of [opposing] players after the game and they all give me the respect, as well as the other coaches. But as far as the fans and the media, I’m just the ‘other guy,’ the third ‘Son of Anarchy’ or whatever they call it. So that’s something I’ll never let go of.”

But don’t think for a second that Harrison doesn’t think highly of himself. “I’m not as bad as Sheldon, but I’m somewhere close,” Harrison said, smiling.

Though he doesn’t believe he gets the recognition he deserves, the Jets nose tackle knows he’s a dominant force in the middle.

In fact, he believes there’s no one better.

“I feel like I’m the best nose tackle. I really believe that,” said the 26-year-old, who is affectionately known as “Snacks” and speaks with a thick Louisiana twang.

“Obviously, there’s other guys in the league at the same position who have gotten more sacks than me, but I really don’t believe that there’s another better. Those guys play two and three times as many snaps as I do.”

The 6-4, 350-pound lineman used to be a New England Patriot. But though he idolizes former Pats nose tackle Vince Wilfork, Harrison didn’t back down from declaring himself better than Wilfork.

“Yeah, that’s how I feel,” he said. “I look up to Vince. Always have . . . That’s why it’s crazy to have [former Patriots defensive line coach] Pepper [Johnson] here now, because Pepper was one of my idols too. So to know that he coached Vince, I’m just trying to take in everything he says.”

Unlike most of his teammates, Harrison didn’t play Division I football and wasn’t drafted. Instead, he longed to play football while stocking shelves at Walmart in Lake Charles, Louisiana.

After a brief stop at Northwest Mississippi Community College, Harrison eventually found his way to William Penn, an NAIA school in Oskaloosa, Iowa. And in 2012, the Jets signed him as an undrafted free agent.

His rise up the NFL ranks, from no-name backup to starter, is as inspiring as it is surprising. But despite his football achievements, it took years for Harrison to acknowledge his worth on the field. The tipping point came last season, courtesy of a conversation he had with Jets left tackle D’Brickashaw Ferguson.

“I’ll never be satisfied with myself. I’m my worst critic,” Harrison said. “And it took having a conversation with Brick last year to kind of curb that, because I couldn’t tell you not one thing positive about myself. I’ll tell you all the negative. And it’s not something that I was doing purposely. It was just natural.

“I had the conversation with him and I tried to look at some good things that I do. But I’m just so consumed with the negative.”

That’s why the chip on Harrison’s shoulder is still there. And he believes it’s a positive thing, “whether you’re in Year One or Year 10.”

In April, he signed his restricted free-agency tender offer for this season ($2.356 million). Last season, his first as a full-time starter, he recorded 68 tackles as a vital cog in the Jets’ fifth-ranked run defense.

At some point, the Jets will have to assess Harrison’s long-term value. But Harrison knows it’s up to him to prove he deserves to be their nose tackle for several more years.

“I know I’ll get mine,” he added with a smile. “Hopefully, sooner rather than later.”